The editors of Moon City Press are pleased to announce Moon City Review‘s 2015 Pushcart Prize nominations, which are as follows:

Good luck to these authors and congratulations to them and all of the writers who had work in our 2015 edition!

Andrew Brininistool’s debut story collection depicts the dysfunctional lives of multiple protagonists. All characters, primary and secondary, are forced to face skeletons from their past, present, and future. No character is safe from the cruel injustices of reality, and what follows is an immense amount of suffering and isolation.

Crude Sketches Done in Quick Succession has nine short pieces that portray central themes such as lost opportunities, lack of fulfillment, and disappointment. In his fourth piece, “Young Arsonists in Love,” the overall concept of the collection is illustrated in one line, which states, “Life doesn’t unfurl its graces to each of us in complete tidy bundles.” In this story, the protagonist is a successful, retired businessman who made his fortune developing a potty-training device called Daily Constitutionals. This invention consists of a potty-training seat with a six-inch LCD flat-screen monitor that asks children a series of multiple choice questions about the U.S. Constitution. The development of this device helps the protagonist obtain the American dream, including a trophy wife, vacations, and cars. But his artificial happiness is short lived. As for the majority of characters within this collection, alcohol creates a divide between the couple and ultimately leaves him surrounded by empty whiskey bottles in an empty house.

In the second story of the collection, titled “Stick Figures,” the protagonist is mentally and physically forced to battle his demons. At the beginning of this piece, the protagonist and his naive roommate Cody are roughed up by a couple of guys at a local bar. The reader comes to find out that this is a weekly occurrence for both characters due to Cody’s recent concept of “rebirth.” Cody has recently discovered that being a devoted to the Mormon Church is not what part of God’s divine plan. Rather, indulging in sin is a Godsend, whether that be sleeping with girls or tripping on LSD. The protagonist is Cody’s guide into the underworld. For Cody to become a holy man once more, he must fall before he can rise from the ashes. The protagonist’s chief purpose is to catch Cody when he falls. This dynamic adds tension to the relationship between the protagonist and Cody, the protagonist and his ex-wife, and the protagonist and his daughter. As the narrative continues, the narrator must confront his role within each relationship and determine whether his role plays a significant part in God’s plan.

This collection is true to its title; it is a fast-paced collection focused on the failure to attain the American dream. Whether the story is about a son trying to collect his dead father’s trophies after his mother sells them out of grief, or a young Miss Oklahoma running from the Oklahoma Commission for Beautification and Image Promotion, participants in Brininstool’s collection never achieve happiness. Rather, they remain isolated characters who reflect on what could have been. 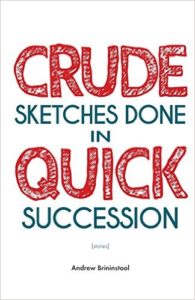 Excuse our dust. We are in the process of adding new features to the site, which will be expanded to include new content such as book reviews, author features, interviews, and a catalog page for current and back issues. So, if things seem a bit scattered for a while, just note the decorators running in and out and know it’s for a good cause.